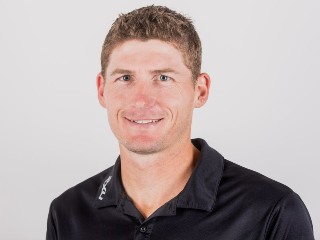 Chris Harris started his rowing career at Whanganui High School and Aramaho Whanganui Rowing Club in 2002 when he was 17 years old.

He made his first New Zealand appearance in the U23 men’s coxless four in 2007 which won silver at the World Rowing U23 Championships in Glasgow, Scotland. Chris’s next New Zealand selection came in 2010 when he was part of the elite men’s sweep squad, and he was later selected in the men’s eight for the World Rowing Championships at Lake Karapiro, where the crew finished 5th. Chris spent 2011 in the elite men’s four and helped to qualify the boat for the London Olympics by finishing 8th at the World Rowing Championships. His crew finished 11th at the 2012 London Games, after which Chris took a break from the sport.

He returned in 2014 with two oars rather than one in the men’s quadruple sculls, before teaming up with Robbie Manson in the men’s double in 2015. The duo came home with a bronze medal from the World Rowing Championships in Aiguebelette, France, and therefore qualified the boat for Rio in 2016 where they finished 11th. Chris linked up with John Storey in the same boat class in 2017 and the duo finished the international season unbeaten and became world champions in Sarasota, Florida. In 2018, in what was a difficult year for the team, the same double finished with a bronze medal. More injuries in 2019 made a tough year for Chris and John in the double. At Henley Royal Regatta the crew set a new course record for the men’s open double, although this was broken in the final in which Chris and John came second. At the 2019 World Championships Chris and John finished in 8th place, securing a spot for a New Zealand men’s double at the Olympic Games.

At the Tokyo Olympics Chris partnered with Jack Lopas in the men's double and they placed 2nd in the B Final.

Off the water Chris holds a Bachelor of Engineering with honours from Massey University and works as an engineer at Wilkinson Transport Engineers. Chris and his partner Gemma welcomed a baby boy in 2019 and have a beagle named Twix.